The Thermal Baths at Brigerbad by the Grimentz Rambler

When Living in Sion commissioned me to test out the thermal baths at Brigerbad—a place I’ve never visited in my 10 years of living in Switzerland—I jumped at the chance. After a brief exchange of emails with Olivier Foro, the affable Director of the baths, we settled on a Wednesday morning in the first week of March. The timing could not have been better: I had just survived a very busy working period and was feeling wrung-out and exhausted. What better cure than a morning spent in the heady steam of the latest thermal baths to open in the Valais? 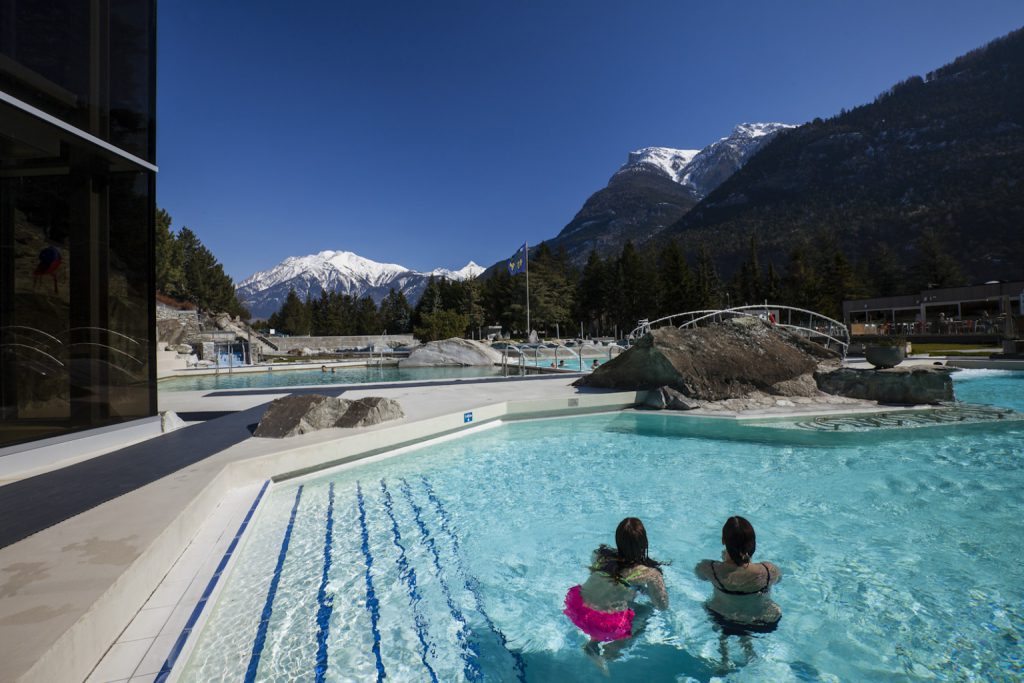 Photo above – One of the outdoor pools at Brigerbad

Over a well-made cup of cappuccino and flakily delicious croissant (Gipfeli—as this is the Oberwallis and therefore in German-speaking Switzerland), Mr Foro chatted enthusiastically about the thermal baths as we sat in the airy surroundings of their Restaurant Cécile. A resident of Sion and former marketing manager of the thermal baths at Ovronnaz, he had been appointed Director of the Brigerbad baths in December 2016. My first question was about accessibility: I’d driven down in somewhat stop-start fashion from Grimentz, my progress up the Brig valley hampered by the juggernauts heading for the Simplon, and an endless succession of roadworks around Visp. Aha, he laughed, you should have come by public transport!  Editor’s note: Practical information on getting to the baths at the end of this article.

Discovered by the Romans

Further well-informed chat led me to uncover some intriguing facts about Brigerbad:

Emphasis on Wellness at the largest thermal baths in Switzerland

I was astonished by this last fact, because one of the most noticeable things is that while the village of Brigerbad can be seen from the main Visp-Brig road, the thermal baths themselves are discreetly hidden behind the trees. Unlike the other thermal baths in the Valais (Lavey-les-Bains, Leukerbad, Ovronnaz, Saillon), there is no hotel on site, no medical facilities or consultant physiotherapist, and one main restaurant, one indoor snack-bar, and an outdoor self-service restaurant with the terrace only open in the summer.

The emphasis at Brigerbad is on Wellness, and this I could see for myself while Olivier Foro conducted me on a private tour of the complex, both inside and outside. Their latest concept is called “FeelFree Brigerbad”, and includes Movement, Nutrition and Relaxation—with a dedicated indoor pool offering swimming classes to all the local schools. 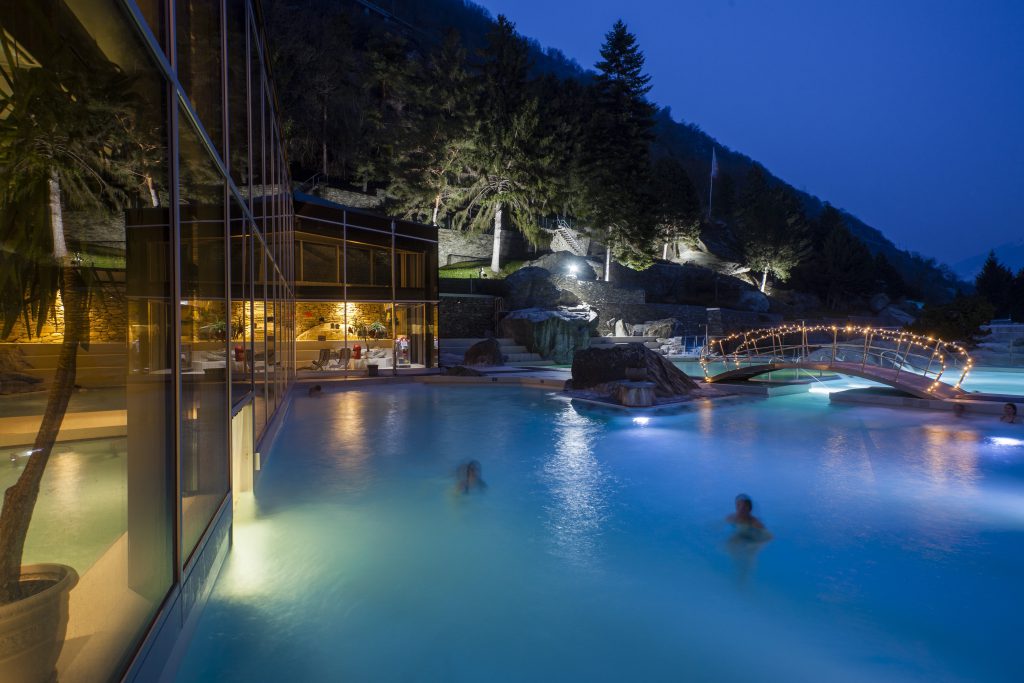 Photo above – An outdoor pool illuminated at night 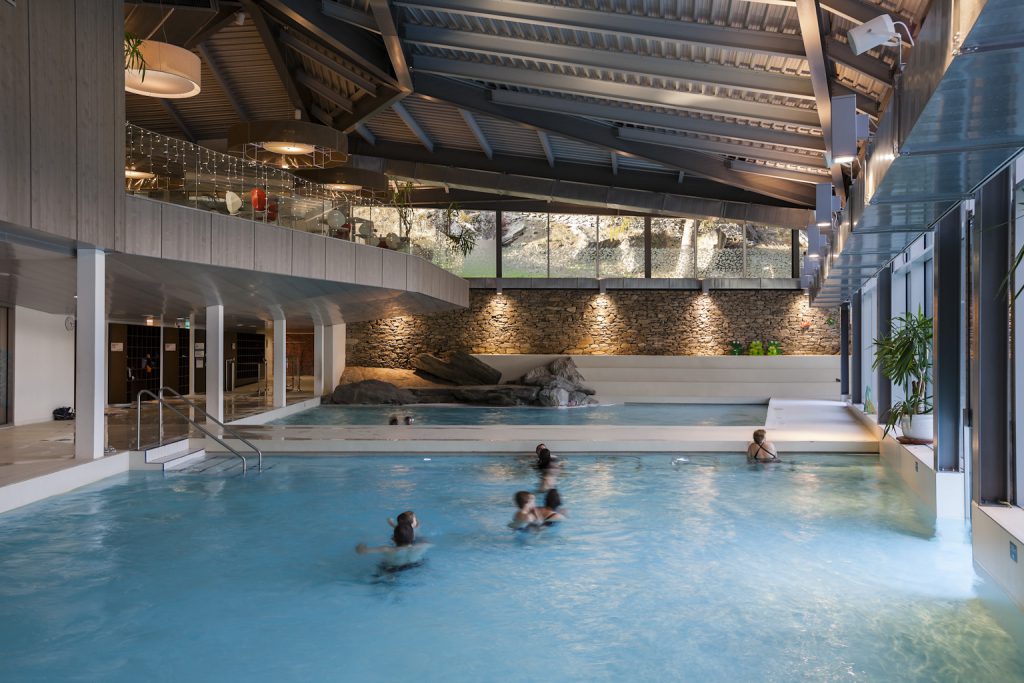 Once our hour was up, I was keen to test out the facilities for myself. Armed with a magnetic wrist-band (giving access to both indoor and outdoor facilities), as well as a towel, I was able to stow my stuff in a secure locker, and then make my way to the children’s pool. This leads through a plastic curtain into the first outdoor pool (around 34°), with the usual underwater jets placed along the edges, a Jacuzzi area, and a little bridge into the next pool. Various sections of the outdoor area are only open from May onwards: the diving pool, the water channel with very strong underwater jets, and the 182-metre giant water slide—as well as the terrace and outdoor self-service restaurant. 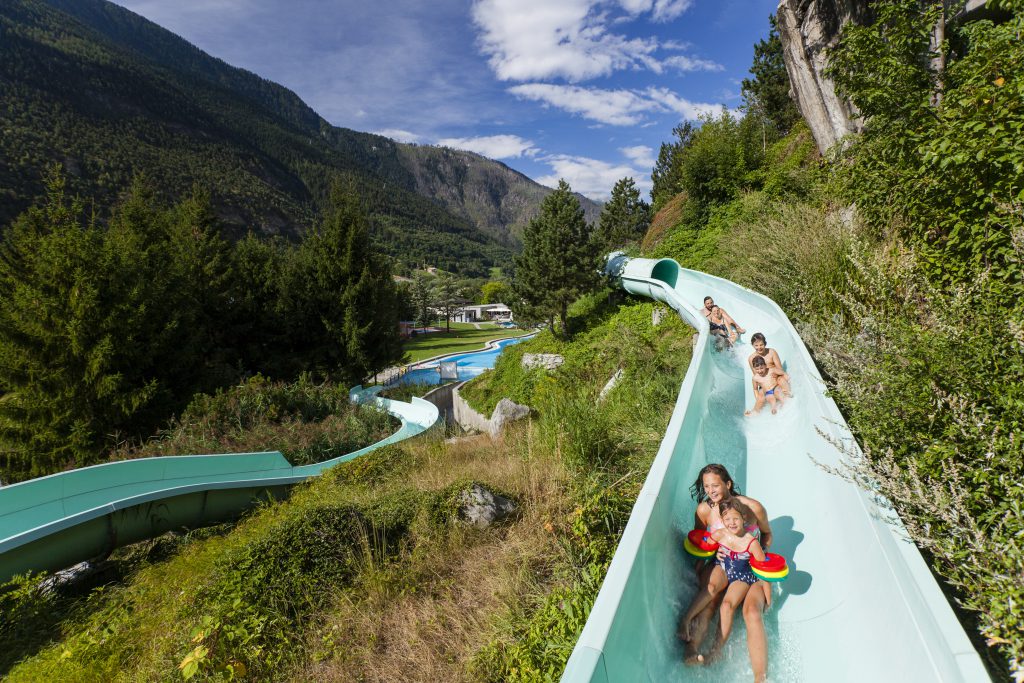 As the day was rather gloomy and the mountain views partially obscured, I was far more interested in testing out the hammam. My wristband allowed me through the indoor turnpike into the hammam area, all tiled in warm reds and oranges. There are 3 steam-rooms at different temperatures and with varied odours (such as eucalyptus and wild heather), in between which is a small plunge-pool to cool down. Here bathing costumes are to be worn at all times. Upstairs the tiling turns to cooler blues and greens, and the three sauna rooms are where those keen to do so can stretch out naked, as long as they wear a towel to walk between the different sauna rooms. I liked the fact that naturism was so discreetly handled. I remained in the hammam area, however, my main focus being Brigerbad’s unique underground grotto. Here the water is heated to 42°, which after 10 minutes’ immersion is almost too much to bear if you’re not used to it. It was delicious, but I felt quite faint and for a while had to make use of the loungers in the Quiet Room.

By the time I emerged back into the warm Reception area, I felt cleansed and revitalised. I was impressed by the laid-back attitude in Brigerbad, by the friendliness of the staff, by the compactness yet comprehensiveness of the facilities on offer (including a corridor of spacious and well-equipped massage rooms). The thermal baths are partnered with various local hotels, and the prices for the different packages on offer compare very favourably with other thermal baths in the Valais region. I would certainly like to return, to explore further, even to stay for a few days.  For more information see the Brigerbad website here

All photos above and below – courtesy Olivier Foro, Director,  Thermal Baths Brigerbad 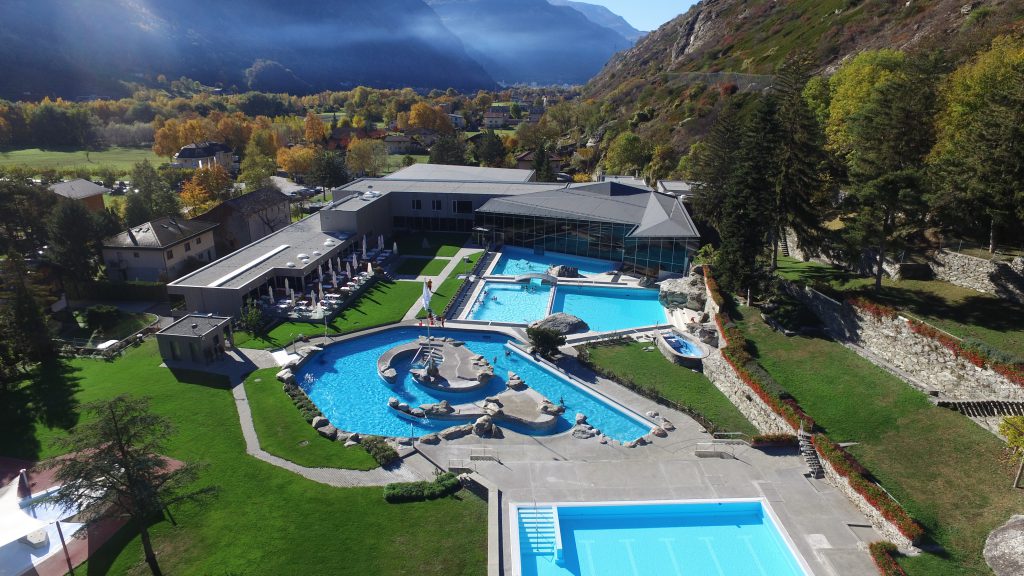 Photo above – The whole site in autumn, with Visp visible in the distance

The baths are at Thermalbad 1, 3900 Brigerbad

Note – The baths will be closed for annual maintenance from Sunday 8 April to Thursday 19 April (12 days inclusive).

Camping site: open May to October

Public transport to the thermal baths at Brigerbad couldn’t be simpler, or more convenient.

In the Rhone valley, take the train to Visp from:

Or from the Bernese Oberland and beyond, the trains hurtle through the Lötschberg tunnel, making the times to Visp from:

Coming out of Visp’s main station, find Bus 511 and it’s a mere 10-minute ride directly to the baths. There are three buses an hour, with a daily total of 27 buses arriving in Brigerbad.